Either you accept this fact or not, but your Windows PC is not completely secured against malware attacks. This is a well known fact that Windows computers are more vulnerable to threats in compare to Linux, Unix, or Mac. Windows has now stopped all support for previous versions until Windows 7, so if you are still using XP, Vista or 7 then you are doomed. 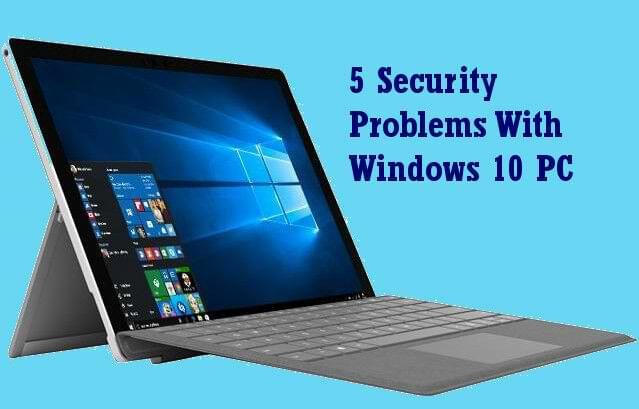 Windows 10 is also not very much secured, as new vulnerabilities often appear time to time. Well you can’t further from Windows 10 now, can you? So what you can do about it? You need to know the some of the biggest security issues with your Windows 10 PC and fix them to protect your computer from viruses. So we have complied a list of 5 security problems with Windows 10 PC in this article.

You may have already experienced some of the problems mentioned in this post but now its time to fix them. You cannot ignore those Windows 10 security problems any longer because Ransomware threat is on its peak these days. Some of the most notorious File encrypting malware such as STOP/Djvu, Dharma, Crisis, Phobos have launched several variants.

Windows 10 has taken really good measure to make their OS secured but its not enough. You need to put some effort yourself to make your system safe. So here is the list of security problems with Windows 10 PC and how to fix them.

Microsoft has provided an inbuilt malware protection “Windows Defender” as the primary security software. But we all know that its not so good against dangerous threats. It simply not good enough to block newly developed threats and malware.

Using a good antivirus protection like AVAST or Bitdefender will be good idea to fill that void. But you known most of the leading antivirus programs are still unable to block threats like Ransomware in first place. They are good for simple spyware or Trojan horses that are already in their database. For further protection, you can use a powerful anti-malware program like SpyHunter which can work with all antivirus software.

Same as the malware protection, Windows 10 also fails to excel in Firewall department. The basic function of a decent firewall is to block malicious connections and stop suspicious sites among other functions. But Windows 10 in-built firewall protection lack these features which makes your system more vulnerable to threats. It can also block connection to some important programs and prevent you from using it. However you can customize the firewall settings but it will cripple the security. You can use an antivirus program Avast Premium Security which provides Powerful multi-device firewall or you can use third party firewall like Glasswire.

3. Lack of OS Updates and Patches

Lack of OS updates and security patches are another major issue with Windows 10. Your PC also blocks updates for some programs automatically which can result in malfunction or create a vulnerability against malware attacks.

They best way around this problems is to check your programs manually for software updates. Only download updates and security patches from official websites. Fake updates and patches could bring harmful threats and malware on your PC like Trojan, Ransomware, Worms, Spyware etc.

File and share permission is an interesting feature of Windows 10 where users can share there files on local system to access it anywhere. It is simply a great idea but have you ever thought that some creepy people like say Hackers can use this feature for illegal activities.

Just imagine that someone else got access to all your personal files without your permission. The very though of this is terrifying. Hackers are very nosey and they like to interfere in other peoples’ business but its on you to keep your sh*t safe. Stop using this feature if you want to keep your private information safe and all to yourself.

Many people keep forgetting their passwords and thus they remove this protection completely. This makes your system vulnerable and anyone can access your files. Instead, Windows 10 should provide alternate method of forgot passwords or you can keep record of your new passwords every time you change them.

By going through above list, you must have came to the conclusion that biggest change you need to make on your Windows 10 PC is to use robust malware protection. You can download Avast, Avira, Bitdefender, Norton or any number of programs. Using an Anti-Malware Tool like SpyHunter gives you edge over threats and viruses. Not only you can stop them from infecting your PC but also also remove them easily if somehow they manages to infiltrate.

If you have any thoughts on this list of problems related to Windows 10 PC, tell us in comments. If you have any suggestion or queries then point them out and we will feel happy to include them in this article.

Robert is the Chief Security Expert and Founder of PCSafetyGeek.com website. He is a cybersecurity enthusiast who loves to research about Malware outbreaks and write about their remedies. He also like to spend time trying new software, reviewing them and sharing IT news. However he is a real coffee lover and likes to play chess in spare time (which is quite rare 😜).